Jimmie’s Chicken Shack was one of those independent bands that I love. A band that always did everything their way and never compromised. Their musicianship was way underated and they successfully were able to appeal to a wide variety of listeners. Unfortunately they somehow managed to stay under the radar of the mainstream rock and only had limited success with a few singles even though they toured extensively with some major rock/alternative acts. They just never quite found their own major success that they greatly deserved.Jimi “Haha” Davies formed Jimmie’s Chicken Shack in 1992 and after a few years of playing the Maryland and east coast scene and selling thousands of records on their own, Jimmie’s Chicken Shack burst onto the alternative scene in 1997 with the release of their major label debut, “Pushing the Salmanilla Envelope”. They soon made a name for themselves in the alternative scene as a fun loving group with a great live show.  After the success of their first album came an extended break before the release of their second album. Their second major label release, “Bring Your Own Stereo”, saw some changes in the band, a new label, and but the same sound that made Jimmie’s Chicken Shack what it was. Limited success with songs like “Do Right”, and “Trash” solidified their independent status. Unfortunately record label issues once again caused a long break between releases and “Re-Present” was released a full five years after “Bring Your Own Stereo”. This time, with a whole new line up joining Jimi. These long breaks seamed to cause problems with developing a huge following outside the east coast scene and Jimmie’s Chicken Shack only went on to put out one more full length studio album with “Fail on Cue” in 2008.

Although I lost touch with JImmie’s Chicken Shack after the release of “Re-Present” I have always been a fan since I first heard the opening riffs of “High”.  I fell in love with their blend of styles of music and their musicianship. I still listen to their first three albums all the time. “BYOS” became the official road trip music for my wife and I because it was one of the few albums that both of us could always agree to listening to since It “bridged the gap” in between our styles of music we each like. We still have to take it with us whenever we take long road trips. “It wouldn’t be a road trip without Jimmie’s Chicken Shack!”

After loosing touch with what Jimi Haha was up to for about 10 years due to the new music landscape and me living on the west coast and Jimmie’s Chicken Shack staying more on the east coast, I came across one of his artworks that someone had shared on Twitter. I then started following him to do some “stalking” and found out that he was very active in the art scene in Annapolis, was still doing shows as Jimmie’s Chicken Shack, and has a new solo project he was working on entitled Mend the Hollow. I decided I would love to talk to Jimi as I was a fan of his, I love how he maintained a very positive attitude even with all that he and Jimmie’s Chicken Shack had gone through, and I felt that his music was very underrated. I reached out to him and he responded very quickly agreeing to talk with me. Here is what he had to say:

Thanks for taking a few minutes to talk with me. I know you have a lot going on between your music, art, publishing duties, not to mention family and everyday life. Most people would know you from Jimmie’s Chicken Shack. But you are now doing a solo release, Mend the Hollow. How is the project going and what does the future have in-store for Mend the Hollow?

The record is finished. I want it to come out yesterday. I loved making this record. I hope it will come out soon because I’m ready to make another one.

As Jimmie’s Chicken Shack it always seemed as if there was an ongoing battle between the band and record companies, sometimes causing long delays between releases. With the change in the industry landscape and the options that are open to bands today, do you find that it is almost easier to be an independent band anymore?

I think it’s just different. I am not sure if anything is “easier” one way or another. I think it still comes down to the same things that have always mattered.  Playing and writing with heart and honesty. Play hard and work easy. Enjoying yourself. The rest is just toppings.

And, even with all of the issues that you have faced in the business, you always seem to maintain a mostly positive outlook on life. Is staying positive in a world that seems to do nothing but push the negative on you important to you as a person?

I would say it’s more of a necessity than it is important. I think it’s just of a choice. I make up my mind.  I enjoy life much more when I choose to enjoy it.

Your music has always seemed to defy genre, incorporating reggae, funk, folk, rock, rap, etc. Who has inspired you musically?

You have been able to make a living out of music and art without ever being what some might consider a commercial “success”. What do you actually think it means to be a “success” as an artist.

I rediscovered you through seeing your artwork on a website somewhere. Although I am not a student of art, to me it seems as if you do a wide variety of styles. Is there a particular style of art that you prefer?

I think I just like something to be different. I get bored easily. Preference is a moving target.

Where do you have your art on display or for sale currently?

Annapolis Collection Gallery has some stuff. I also have a few large pieces in the lobby of Meryl Lynch at Park Place. That just sounds funny saying that. hahahah

And, speaking of art, you publish a quarterly art magazine in Annapolis, UpStArt, focusing on art, small businesses, and specifically the Upper West artist district. How did UpStArt come about and what is it’s focus?

It came about as an accident and like most of my mistakes I tend to embrace them and then exploit them like they were intended.    The focus is on the creative people in Annapolis and what compels them to do what they do. There are stories about artists, musicians, restaurateurs, history, community service and anything else that seems intriguing.

Going back to your music, Jimmie’s Chicken Shack seemed to be considered by some a non-serious band with hits like “Lazy Boy Dash” and “Do Right” being alternative radio successes. But, being a fan, I know there was also a serious side to your music with songs like “Living with Ghosts”, “Silence Again”, and “Pure”. Being someone who has gone through some difficult times myself, these songs endeared me to your music as much as the singles that were released. As an artist, do you find it gratifying when someone connects to your music as a whole, especially when they connect with songs that may show the more serious side of yourself?

I think it is the best and most humbling compliment and reward. Going back to a prior point, success is having someone connect with a song that shows your more serious side.

Usually in interviews the artist is always asked what musical influences they have had, just as I already have. But our influences in life come from so many people that may or may not have to do with art. Who has influenced you as a person outside of music or art?

I don’t think I could list them all. Family members, friends, teachers and random strangers.

At Don’t Let the Music Stop, we are dedicated to trying to inspire those who may be going through difficult times or dealing with mental illness through music to not give up. How important do you think music, and all art, can be to those who may be hurting?

For me it is the most potent medicine. With the right prescription you can cure anything. Sometimes you need to listen to Ministry very very loud. Other times it would be better to listen to Iron and Wine. Hurt usually subsides with time but the songs that heal us never go away. 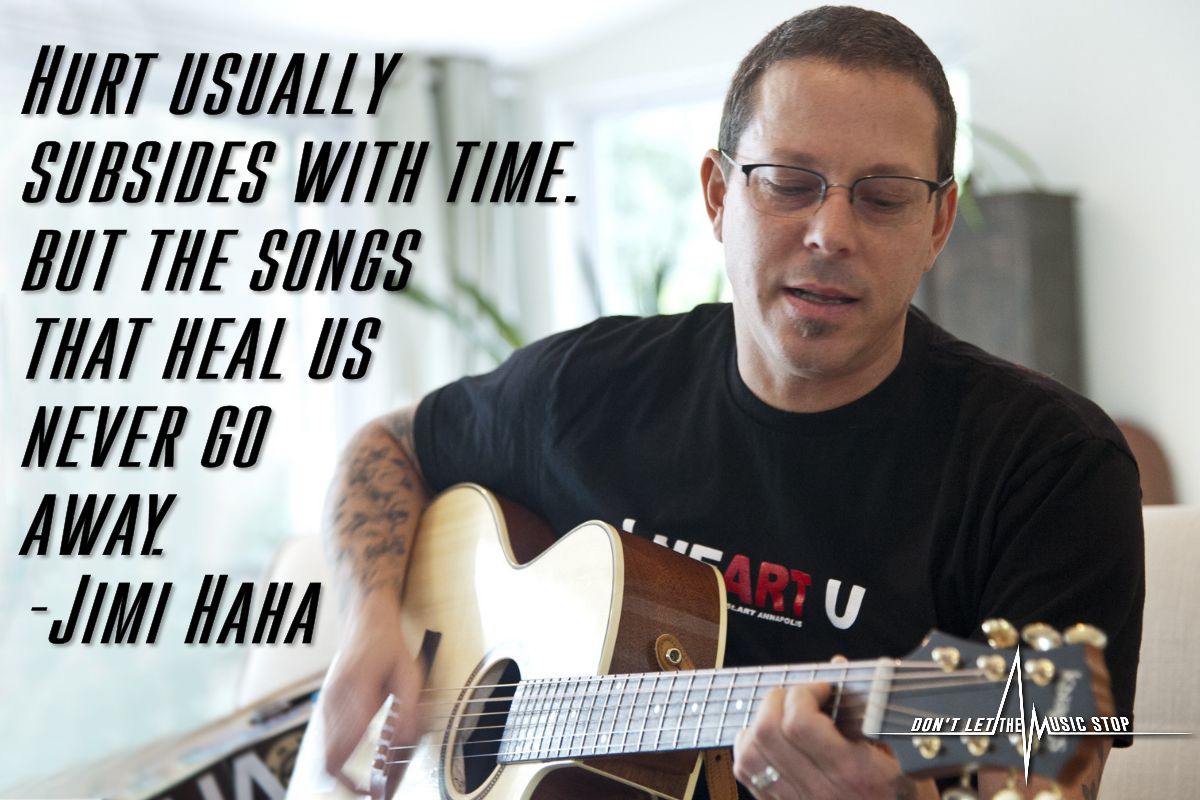 What would you like those that are dealing with a mental illness or going through a difficult time to know?

That they are not alone. Ever.

We have a playlist that solely consists of songs suggested by those we have interviewed as songs that have inspired them. Can you give me a song or two that we need to add to our playlist?

I would like to thank Jimi for taking a few minutest to answer some questions for me. Make sure you follow him, Jimmie’s Chicken Shack, Up.St.Art, and Mend the Hollow on your favorite social networking site.

If you are a musician, no matter your fan base, and would like to share your story or be interviewed by us, please use the contact form at the top of the page. We would love to hear from you. And if you are someone who has been helped by music in your life, we would love to hear from you also. We can help you share your story, publicly or anonymously. Your story could be the reason someone makes it through another day.
Never give up, never give in. You are needed, you are important.​