Leave the Universe- We Are All in this Crazy Life Together

Leave the Universe is a cyber punk influenced Pop/Rock band that was originally from Durango, CO and moved to San Diego, CA when they felt they needed a larger audience than their local scene could provide. Their current line up consists of Kalin Pugh, Cameron Phillips, and Austin Arthur. Currently they have two singles that are available for free at their Soundcloud page: “Dreamers Never Die”, a slower acoustic song showcasing their more reserved pop influenced side, and “Run”, a higher tempo song that showcases their more rock based influences with just a hint of 80’s goth. I just discovered LTU recently through the single, “Run” and was intrigued by their unique sound, lyrical content, and their dark, dystopian imagery. After doing some research, I was even more intrigued, as they tend to be very cerebral and cryptic in their posts. So, I thought I would reach out to see if I could learn some more about this mysterious band.

Thank you for agreeing to talk with me. For those who may not know much about the band (including myself), who and what is Leave the Universe and why should people get to know LTU better?

Cameron: Leave The Universe, more than anything else, is an idea. A concept that stretches through all frames of media, music being the first part that we’ve delved into. We try to create an alternate reality, giving a lens from which to view the world in a new and open way, which we hope will spark creativity and influence the reality that we live in.

Kalin: Leave The Universe, in respect to who we are as a band, is a conceptual project with a common theme of pushing the limit and breaking boundaries for ourselves, our fans, and the music industry. The music is only the surface to what we want to create, and if anyone is even slightly intrigued by what they see, we invite them to take a closer look.

You have a very unique sound that tends to blend a lot of styles. How would you describe your music?

Cameron: We’re heavily inspired by conceptual art, music, and film. Our music is a soundtrack to our own conceptual story-line, and the lyrics are written to support that. Each song writes itself in that respect, and we just listen to what its trying to say. We don’t like to confine ourselves to a specific sound, but simply view each song as a fresh start for creating a new soundscape.

Austin: Everything tends to fall more into the rock/pop category overall, but we never know what will come next.

You guys definitely put a lot of thought into your imagery and concept. How important do you feel it is to have a good visual concept to set you apart or is it just something that came about more organically? 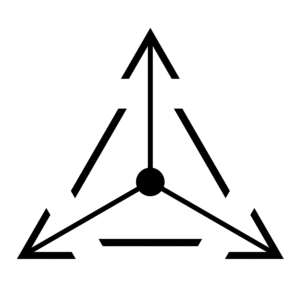 Kalin: The initial dystopian/cyberpunk theme came about fairly organically. However we’ve always felt that it is very important to do something new, something that breaks away from monotony. We wanted to create a whole world to delve into, as opposed to just creating a band. We’re always thinking of new ways to expand that, whether it be through video production, imagery, or the music itself. We feel that people should be able to really dive in deep, get lost in it all.

And, speaking of concepts, I believe I had read in an old interview that you were planning on doing a full length concept album. Is there a possibility we could see one eventually that would take us deeper into the LTU world?

Cameron: We’ve never let go of that thought, and we’re very close to finishing that whole concept album up. It won’t just be through the music though, as we’ve mentioned before, we’re going to make a lot more media and content that will support the whole story. All of the free singles we’re releasing, including the two we have already released, are going to be part of that story. At this point, we’re aiming to release the album mid summer.

When doing research on LTU, it was hard to find an older catalog besides fan uploaded videos on YouTube. Then I saw where you had taken down all of your older music. With the recent line up change and the subsequent removal of all of the old material from your sites, would you consider this a new beginning for LTU?

Cameron: Yes, very much so. When we changed lineup the soundscape changed as well, and so we wanted to remove the older music in order to minimize confusion as well as revamp the entire idea of Leave The Universe. The original band was formed when we all met in high school under a different moniker. When we moved from Colorado to California we took the opportunity to analyze where we should go in order to move forward in our music. When we first theorized the new band, there were a lot of ideas floating around. When things began to get solid, we realized the creative differences were going to get in the way.

Kalin: The split was necessary in order for all members to head in the directions that we needed to go, and with that came the concrete ideas of what Leave The Universe is. The new image, music, and content all reflect that, and the old music was more of a testing ground that allowed us to get to where we are today.

You recently released “Dreamer’s Never Die” and “Run” as singles for free download. I am always interested, in this day and age, to find out the artists’ thoughts on digital streaming and “giving away” their music. Do you feel it is necessary, at times, to give away some of your music to gain a larger audience?

Cameron: Yeah, for sure. We wanted to make a new format for getting our music out into the world. Since we do everything independently and we don’t have the resources at the moment to get major radio play we had to wonder how to get our music out there in the most efficient and viral way for people to enjoy. Our overall goal, above anything else, is not to make as much money as possible but rather to get our music out to as many people as possible. The music is free because in this day and age we think it should be. If enough people like the music then they’ll likely want to support us by coming to live shows and buying merch. We measure our success by influence not by profit.

Speaking of “Run”, it seems to have a theme of escaping and finding a true place to fit in. To many young people this is one of the greatest struggles, finding your place in life. Some of my favorite lyricists do an amazing job of disguising deep meaning behind imagery in their songs. Do you try to have a message that is in all of your music, whether it is openly displayed or hidden within a concept or imagery?

Kalin: I’ve never liked the concept of writing a song that did nothing. Music is a really powerful force in our society and when Cam and I decided to start a band in high school I think we did so with the intention of trying to make a mark. Our concept has a message and the songs reflect that. We’re in a very interesting time period for our world, and things are changing at such a fast pace it would be hard to not have a message in the music. Even if our song seems simple and fun on the outside there always tends to be deeper meaning, and it’s up to the listener how they want to interpret that.   Austin: If nothing else, we want people to have a positive experience, especially at our live shows, if only for a moment. Just let go and just be happy.   –

Who has influenced you musically and personally?

Cameron: We’re very influenced by film and film scores, as I’ve said before. I spend a lot of time listening to movie soundtracks, and I love any music that has a good pop hook. I have an appreciation for every genre of music in a different way, which I suppose is what gives me an open approach when creating our soundscapes. Personally, I’ve always respected anyone who tries to influence the world around them and make a difference greater than themselves. Anyone from Michael Jackson to George Lucas.

Kalin: Yeah, I agree with Cam. I listen to so many different kinds of music, and can give anything a chance. I tend to pull creativity from anything, ordinary or extraordinary. As long as it makes me feel something, I gain influence from it.

Austin: I’m inspired by things that get me hyped. Whether it be songs with a good beat or strong lyrics, or just an exciting experience. Anything that seems larger than life.

What would you like to say to someone who is going through a rough time in their life or dealing with mental illness?

Cameron: At some point in time in everyone’s life they will face adversity. Whether it be socially, mentally, or financially, I believe that there is always a way to turn something in a positive direction. For every difficult situation you’re able to pull yourself out of, you will become a stronger person and be able to tackle the next obstacle even better than you could have before. Maybe some mental illness is just people with different perspectives that others don’t understand, and maybe that’s not such a bad thing after all.

Kalin: The most important thing to remember is that we’re all in this crazy thing called life together, we’re all just walking each other home. No one belongs anywhere, no one exists on purpose, once we can let go and learn to appreciate what we have now, everything that has happened and everything that will happen will fall away. In the end, everyone is just trying to find happiness, and everyone deserves the chance to look for it.

Lastly, can you give me a song or two that you find inspiring to add to my special playlist where all songs are picked by the musicians that have helped out Don’t Let the Music Stop?

Austin: Oh man, I think I’ll go with ‘Work It Out’ by Jurassic 5 and Dave Matthews. It’s a good song and has a chill vibe, it just makes me feel good.

Cameron: I’ve been listening to One OK Rock a lot lately after we saw them live not too long ago, and I think I’ll have to go with their song ‘Decision’.

Kalin: I’ll choose a song off of my favorite band’s recent album. ‘Overdrive’ by Fightstar is just amazing. It has the themes of escape and just being okay with whatever happens next that we like, too.

I would like to thank Leave the Universe for taking the time to talk with me and shed some light on the band, their music, and let us into their world.

Make sure you follow them on your favorite social networking site to keep up on what everything have coming up: 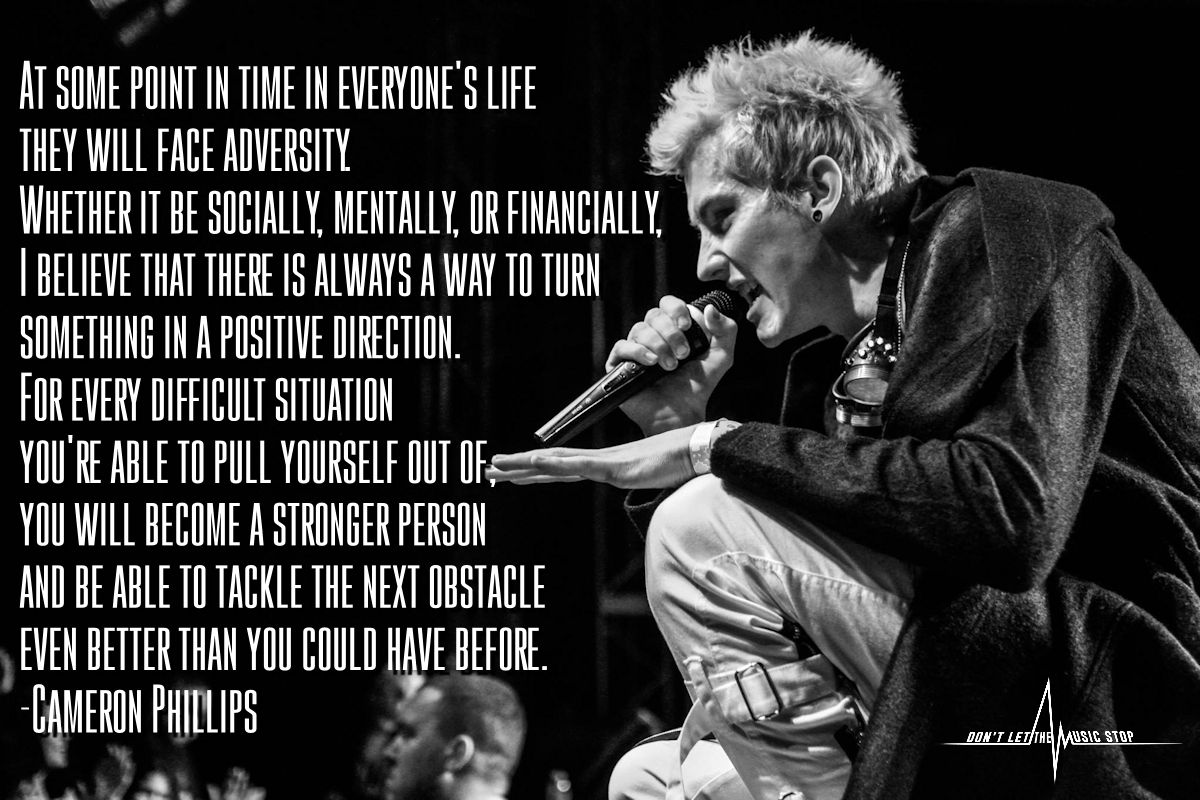