Pray for Sound is a post rock band that hails from Boston Mass and was originally started as a solo project of Bruce Malley. Bruce released the first album Monophonic, which is an expression of his battle with hearing loss, as Pray for Sound in 2011. After putting together a band to play his songs live, the line up actually clicked and they officially became a band. As a band, they continued to grow with each member bringing their own style and musicianship to the band. Since then they have released a single, “23:55”, a full length album, “Dreamer”, a live album, “Live at the Middle East”, and a remix album, “Dreamixer”. They have been gaining a loyal following since their inception and have garnered some much deserved admiration in the post rock music scene. I personally discovered them around 2012 and have been a fan ever since. Currently the band is working on their upcoming full length album that is due out sometime this year. Bruce and the rest of the band are understandably very busy getting the final touches on the album. Bruce and I have been going back and forth via messages and I was finally able to get Bruce to step away from working on the new album to answer a few questions for Don’t Let the Music Stop. This is what he had to say:

First off, thank you so much for doing this for me. I know we have been going back and forth for awhile now trying to get things set up. I appreciate you taking the time to do this since I know how busy you all are right now working on getting the new album out their for all of us that are anxiously waiting on it to come out.

Thank you for the opportunity!  We’ve been working on the new album so long, the whole band is pretty anxious to get the new material out there and to hear what people think of it.

Now, about the new album…even though I know you are probably tired of fielding this one, I have to ask it anyway…how is it going on it and when might we get more information on release date, title, and where we can expect to be able to get a hold of it?

There are so many aspects to the release so this is a somewhat complicated question.  Musically, everything is written and tracked, which is incredibly exciting for me.  We actually bounced out the first mixes this week, so we’re currently listening and tweaking things in the mix.  Mastering will follow that.  Artwork is just about wrapped up too.  Once the artwork and music are both finalized we’ll send them off to be pressed to CD and vinyl. Since we’re working with labels for this release, we don’t have an exact release date, but I’m hoping for Fall at the latest.  We would love to put this stuff out as soon as possible, but given the time and energy we’ve put into it, we’re not ready to rush any aspect.

The band had definitely developed and changed with each new release. Is there anything new we can look forward to on this one that we may not have heard from Pray for Sound yet?

Creatively, we took a lot more risks with this release.  There are a lot more influences including everything from drone to post metal.  The signature Pray for Sound sound is certainly still there, it’s just evolved and refined.

So far, you have released an album about the battles you had with hearing loss, an album about sleep, and one about the end of the world. Are we going to get another concept album with this next release?

Absolutely. The new album consists of a “dark/ depressing” half and a “light/ happy” half. After Dreamer was released, when I started demoing out, songs, I was reading The Stand, a pretty dark book by Stephen King.  A lot of themes from that book came out in the demos. After working and re-working on them as a band, the album became a lot more meaningful. At this point, I think it’s safe to say these songs mean a lot of different things to each of us as individuals. To me personally, the overarching moral of the new album is that we, as people, shouldn’t really dwell on the “good” or “bad” in life, but just enjoy the experience of living. Life, in general, is beautifully imperfect…Something like that haha.

Do you feel that having a concept, especially with post rock or instrumental music, or is it something that sets Pray for Sound apart from other bands?

I don’t think it really sets us apart much since concept records are being written by lots of bands, but I do think that concepts can really enhance music.  Our songs obviously don’t have any lyrical content.  Having a concept allows us to convey the emotions we were trying to touch on through our notes/music. In a world obsessed with singles, I’m a huge fan of albums that aren’t just a bunch of random songs thrown together, but chapters that make up a story.

Recently you had posted about your Spotify plays, and how you used the money to pay for the cabin where some of the album was written and got to use some to make up some more merchandise. It’s unusual for a band to actually have something positive to say about streaming services. Do you feel that they, along with social media, can actually be beneficial to upcoming bands if used the right way?

In my opinion, streaming services and social media are absolutely beneficial to upcoming bands.  Both give people all over the world access to your music. All you have to do now is write good music that people actually want to listen to! We were lucky enough to be added to a hugely popular Ambient/Postrock playlist called “Deep Focus”.  This playlist boosted our streams into the millions and gave us some income that we’ve put directly back into the band.  That income has definitely allowed us to be more experimental and creative with our new material. To add to that, we especially benefit from these streams because we own 100% of the rights to our songs, which is something I would guess artists who you typically hear complaining about streaming services probably can’t say.

Monophonic was written about your battles with hearing loss (it is how the band was named, for those who may not know your history). Your story is an inspiring one of determination and perseverance that you “documented” through your music. How do you feel that music, especially that album, has helped in dealing with things that have come up in your life?

As a musician, it was a goal of mine to release a professional sounding album of songs I truly believed in.  The experience with my ear and hearing loss was both an interesting story (at least I thought) and the (negative) motivation I needed to finally take the plunge. I wanted to prove I could do it.  Since I started Pray for Sound and wrote that album, I’ve definitely found myself using music as an outlet for my struggles in life more and more.  Given that our songs are instrumental too, it’s a great way for me to talk about things without saying a word.  I’m being vulnerable without being vulnerable.

What music has inspired you in your lifetime?

I could go on for days with this question haha.  Here are a few albums across a few different genres that I have found especially inspiring over the years:   Explosions in the Sky – The Earth is Not a Cold Dead Place

Coheed and Cambria – In Keeping Secrets of Silent Earth: 3

Between the Buried and Me – Colors

Saves the Day – Through Being Cool

Brand New – The Devil and God Are Raging Inside Me

If you could say one thing to someone you knew was dealing with mental illness or going through a rough time, what would that be?

Every single thing that happens in your life, good or bad, makes you, you. Try to find a way to own or embrace the bad/negative stuff and use that as motivation to make the good/positive stuff even better.

Lastly, I am creating a playlist of inspirational songs that are hand picked by artists I work with that will be posted very soon. Give me a song that you would love to see on that playlist.

You’re Not Alone by Saosin immediately comes to mind. The message in that song is incredibly positive and really nostalgic to me.  I’ve also always thought of Your Hand In Mine by Explosions in the Sky as a hopeful and happy song that leaves the full meaning up to the listener.

Thank you Bruce for taking time out of your busy schedule to spend answering these for me.

Thanks for the questions! They were a pleasure to answer.

To find out more information about Pray for Sound, or to keep up on the progress of their latest release, please visit them on your favorite social media site 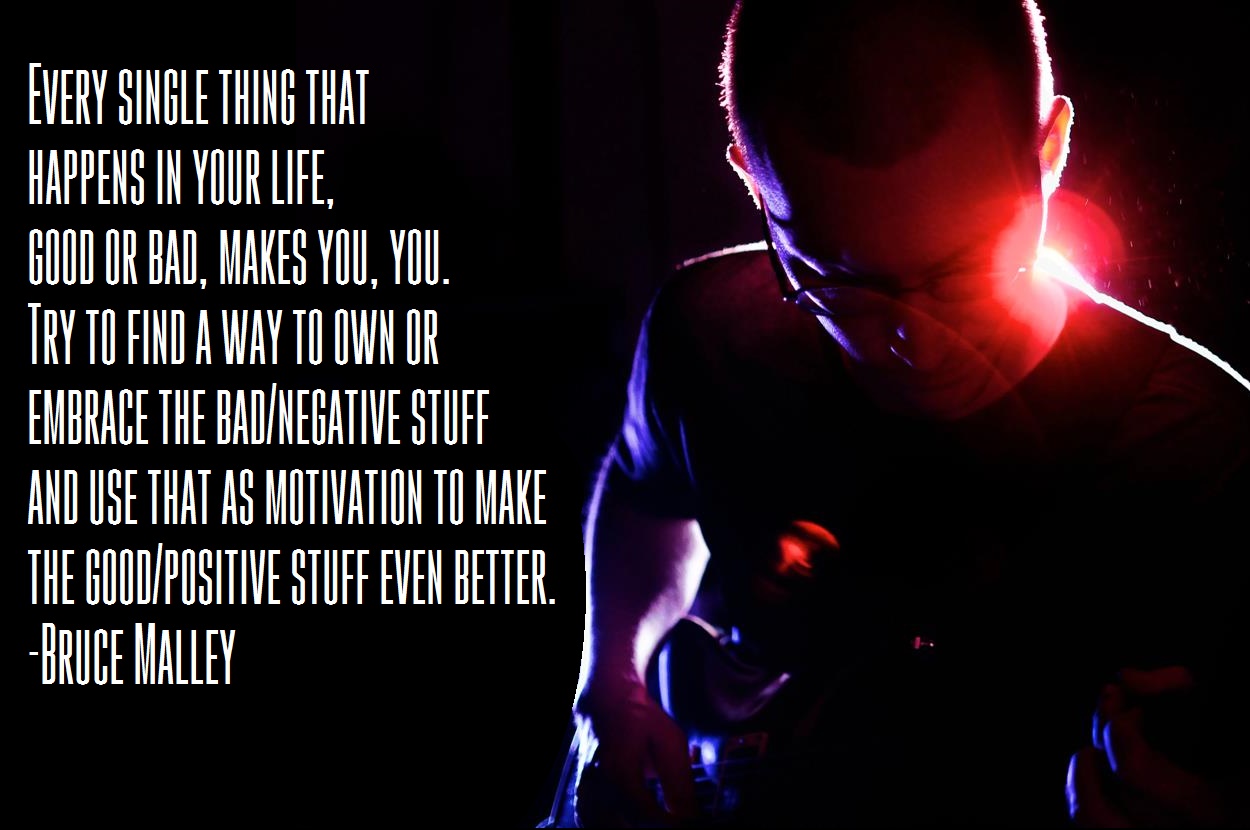